This, believe it or not, is a sewage works. Well, a sewage pumping station, to be precise. The Victorians certainly weren’t overcome with humility about their achievements, were they?

In 1858 London had a hot summer (remember those?). A really, really hot summer. It was in the midst of a population explosion, too, and not long after the invention of the flushing toilet, which many people had experienced for the first time at the Great Exhibition of 1851. It all added up to a LOT of sewage being disposed of, and the only place for it to go was the Thames.

It stank. Eventually it caused such a problem that even Parliament was moved to do something about it, and committed vast sums of money to solving the problem as quickly as possible.

Bazalgette, Chief Engineer with the Metropolitan Board of Works, had a plan. He decided to construct a series of vast pipes to transport the sewage out of London and, err, dump it in the river further down.

OK, so it may have been a short-sighted plan, but it was certainly an ambitious one:

“The network included 82 miles of new sewers, great subterranean boulevards that in places were larger than the underground train tunnels then under construction. With a minimum fall of two feet per mile, the main drainage sewers employed gravity to conduct their contents downstream, while smaller sewers were egg-shaped (narrower at the bottom than the top) to encourage the flow.” [Source]

Many of them were concealed under what were to be called the Victoria and Albert Embankments – for which Bazalgette is perhaps best known. These huge earthworks both concealed the sewage pipes and narrowed the river, making it flow faster (and, incidentally, putting an end to the ‘frost fairs’ which had been held on the frozen surface of the slow-moving river in the coldest winters). 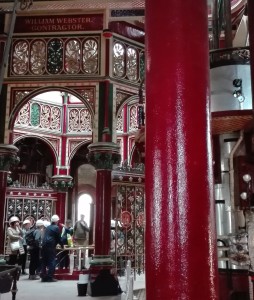 It was a mammoth task, but it was all complete, and the Crossness and Abbey Mills pumping stations (on the south and north of the river respectively) were both open and running within ten years of Bazalgette receiving his commission to do the work. That’s pretty impressive.

Yet even with that speed, they found time to make the pumping stations beautiful as well as functional. No half-measures here!

By 1953, however, the pumping station at Crossness had been superseded by a new sewage treatment works and the magnificent steam-powered engines were left to rust.

Thankfully, the building wasn’t demolished, but stood around for 30-odd years until a trust was established, formed by a bunch of engineering geeks, mainly, who set to work restoring it to its former glory, and adding a cafe and exhibition space (and of course, loos!).

You can visit (as I did) for a guided tour roughly every other Tuesday. These must be booked in advance, and at the time of writing (June 2019) they are fully booked until mid-August. Alternatively, there are a number of Sundays when the site is open for ‘Family Open Days’, and on some of these you even get to see the steam pump in operation (Next Sunday opening: 23 June 2019, 10.30am-4pm). No need to book for these (and if arriving by public transport these are good days to go as there is a shuttle bus from Abbey Wood station). If you’re planning to walk from the station, allow about 45minutes to account for finding your way around the site to the right place.

It’s a bit of a mission to get to (made worse when I visited because, ironically, of a sewage spillage across the pedestrian access route), but if you’re seriously geeky about fabulous Victorian engineering you won’t let that bother you.

How much: Adult: £6 (Open day with no pump running) to £13.57 (Guided tour)
Child: £2 (I can’t see a separate child price for the guided tours – I’m not sure whether that means they can’t join them or that they have to pay the adult price. Contact Crossness to find out._

Jennie Pollock is the author of 'If Only' (The Good Book Company, 2020). She lives in central London and is passionate about reading between the lines of our moral and ethical assumptions. She blogs at jenniepollock.com and tweets as @missjenniep View all posts by Jennie Pollock

This site uses Akismet to reduce spam. Learn how your comment data is processed.

Whether you’re new to London or have lived here for decades, there’s always something new to discover. Come with me on jolly jaunts and amazing adventures around this fabulous city.